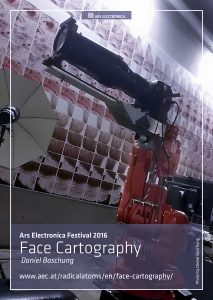 Who are the alchemists of our time, actually? The way we see it, they’re the creative ones whose hybrid working methods are overriding the borders between art and science, opening up completely new prospects thereby and drawing trailblazing conclusions from they’ve seen—the interdisciplinary, international teams of artists, scientists, designers and engineers who are now at work on the future of 3-D printing, genetic engineering, artificial intelligence, self-driving vehicles, nanotechnology and lots more. The “Alchemists of Our Time” exhibition at this year’s Ars Electronica Festival spotlights a new generation of artists and researchers—what they’re working on and how they’re going about it. This show will be running in the spacious halls of POSTCITY on the grounds of Linz’s main train station.
“Alchemists of Our Time” is a sprawling exhibition that features an inspiring mix of artistic takes on futuristic technologies. Multiple “Artists Labs” showcase works by individuals or interdisciplinary teams to provide fascinating insights into their concepts and methods. A high-profile eye-opener fronts this array: “Sculpture Factory” by Davide Quayola (IT) demonstrates how easily an industrial robot can morph into a journeyman sculptor. Right on site in POSTCITY, it will serially replicate meter-high sculptures by Michelangelo. Close by is a presentation of the projects singled out for recognition with this year’s STARTS Prizes awarded by the European Commission: “Magnetic Motion,” a futuristic fashion collection by Iris van Herpen, and “Artificial Skins and Bones,” several projects produced under the aegis of Berlin Weissensee Academy of Art, Fablab Berlin and Otto Bock, the world’s leading manufacturer of prostheses. Awaiting visitors a few steps further on are projects by Yasuaki Kakehi, Jussi Ängeslevä, Joe Davis, Marjan Colletti, Yoichi Ochiai, Lucy McRae, Masaki Fujihata, Shiho Fukuhara and Georg Tremmel. Here, festivalgoers can also partake of the works created by artists who’ve just completed an Ars Electronica residency—for example, the artists collective Quadrature that recently spent time at the European Southern Observatory’s facilities in Chile and Germany. Other participating artists: Tomotaka Takahashi (JP), Eric Dyer (US), Helene Steiner (UK), Daniel Boschung (CH), Thom Kubli (GER), Annouk Wipprecht (NL), David Benjamin (US)

Face Cartograhy at the ARS Festival 2016

The composed mega-portraits are disturbing. Face Cartography is the Swiss publicity and news photographer Daniel Boschung’s latest project. He maps faces. Instead of taking pictures himself, he removes himself from the process by delegating the work to an ABB industrial robot controlled by  specially customized software. The standardized portraits make a surprising impact. Each picture consists of about 600 single shots comprising 900 million pixels. The result is hype-realistic. Stubble turns into a trunk, a wrinkle into a canyon, a nostril into a cavern. These facial landscapes are dismaying—why? Emotions are completely absent. They appear only briefly, while macro photography takes half an hour. The human subject has to remain motionless while being photographed by the robot.